A brief history of the Open edX platform.

I have been recently involved in contributing to the Open edX project.

In literature we have been told learning about history is important in order to understand the present and better predict the future. And I do think that also applies to a continuously evolving open source project like the Open edX.

Add to that while I have been going over the project, to learn more a particular concept or to disambiguate an obscurity. I would mostly end up with some historically we...etc.

So let's go through that history. First I will go over the numbers, of the repos inside /openedx org at github, with an overview of the project in general.
Secondly I will dig into edx-platform repo in particular, in the eyes of git, using mainly git diff and git log, I do an overall summary for each year, from 2011 to 2022.

Note: Open edX is a continuously evolving project, thus it's important when going over this overview or any simliar doc to take the last edited time into considration. Which is 19th of May 2022 in this case.

Code lives in repos, there are a total of 189 repos as of the time of writing. I have made a little script to visualuse how repos count increased over time. 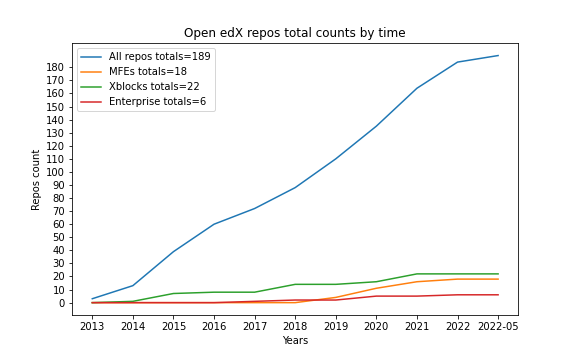 I have also grouped/categorized some repos by repo type, more on that later.

As you can see from the graph the number of repos is continusesly increasing, it's important to note though that, a new repo doesn't mean a new feateur. May be it was decoupling a piece of code from the main repo edx-platform.

Are repo dedicated to extend the functionality, of the learning experience, both in studio and LMS. With XBlock you can create a new type of problem, add new feature, e.g. let learner mark that they have complemented a unit.

XBlocks are essentially a Django based app, which can be installed to extend functionality of the platform mainly in the learning experience.

As you can conclude from the graph XBlock is may be when of the earlist feature available for the project, and though the total count is 22. There must be way more than 22 XBlocks. 22 is number of XBlock repos that are in /openedx org, i.e. they are theofficially available XBlocks.

Are Repo which are based on the a modern micro frontend framework. They are React based, with paragon as a design system.

Each MFE is responsbile for a specif user-centric UI, for example there is an MFE for the account, profile, learning and gradebook...etc.

As you can see from graph, MFEs are relativity new, there were built in order to decouple server from UI rednerding. Without MFE almost for each UI changes the client would send a request to the server and then server render a template then respond to client.

However with MFE instead the communication between client and server is based on JSON RESTful API. Communicating with JSON instead is way computationally cheaper, than responding with a rendered response.

On other side this approach in my opinion brough two main challenge:

While the second challenge is temproray, the first one is ongoing.
However the community is aware of that and some work is already being devoted to solve those main issue.

I don't have much knowledge around these kind of repos. My speculation seems that edx.org high class clients. the way I would put it, is that I think a consdirable amount of effort is being put into it from edx.org.

There are total of 60K commits, lets get other random

I think to be more accurate and fair and get picture of the project, lets check the distribution of commits, I split the commiters into 3 sets, first commiters, who did at least 100 commits of their total commits, second who did between 10 to 100, and third who did between 1 to 10 commits.

Here are the result: 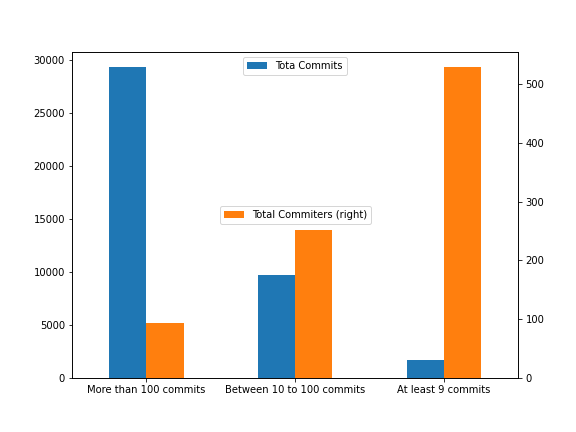 I am not really satisfied with that, given only 10% commiters did 70% of commits.
This will tell us why the project is heavily influenced by edx.org, I bet most of commiters in top group are affiliated with edx.org.

When I shared this blog with the Open edX community, I recevied a note from one of long time contributor David Ormsbee:

But if you’re treating all commits as equal and want to measure who is doing what in the code, you might want to limit the time range to after 2015 or so
-- David Rmsbee @ https://discuss.openedx.org/t/blog-a-brief-history-of-the-open-edx/7358/2

So following David, advice I have recreated the bar graph starting from 2016 and the result was different as he has expected. 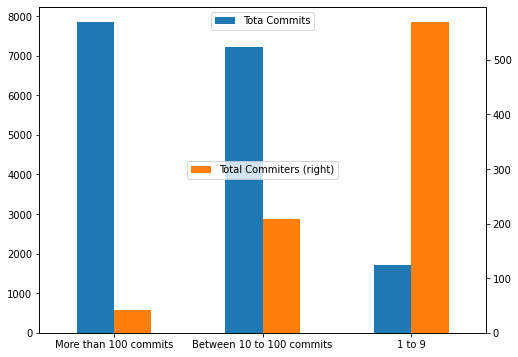 As you can note, in the second graph the distrubution of commits between the first two group are almost equal. This according to David has to do with the change of the commit policy, since initally commiters didn't squash their commits. Add to that also initally edX used the main project repo for marketing site content. Which would defeinily have a larger share of commits. You could refer to the cite link above for more context.

But lets the see how these bars came out to be this way overtime, i.e. how did come up with that from 2012 to now.
Recall for generating the git shortlog -sn --no-merges >> commiters.txt, lets repeat that but with adding a filter for date, e.g for to get all commiters by 2012:

I don't there is much to say

We will explore the changes on the edx-platform repo, year by year. Like what was added, deleted, modified.

Not much for 2011, just one contributor[^3], no thing serious so far. Also note that the date of the first commit which is aviable to public is Dec, 7, 2011. So there was not much time to do until new year holiday I guess.

I think the main work was about removing hard coded data (hence 70% of the change are deletion), like staff images, course content. There was even a directory called Kirchhoff_files!.

You can see for example the image of Anant Agarwal Who I think played a critical role in the development of the project. I think he was a CEO of edx.org until they were bough by U2.],Gerald Jay Sussman, and also the first.

Beside deletion main focus was authtencation, registartion. One can assume that thinking was we want to move this from being an internal project at MIT to something general that other organization can benfit from.

From 2014, Open edX started to support mobile native app, some effort is dedicated into refactoring hence 26% of the changes are deleted

More adoption to XBlock, for example the circuit is being removed from lms/djangoapps/ since it can be replaced with a XBlock.

Seems most of work was aimed at refactoring, hence 2015 is the year with the most % in deletion beside 2011.

Seems a lot of moving occurred at this period, mainly from /common to /openedx/core.

Here you can find extra code resource I used to get above numbers.

Commit log messages a file for each year accumulative. #

Currently Open For work. You can reach via